The Nut Tree Inn, Michelin Pub Oxfordshire Described by Michelin as: “With its 15C origins and smartly thatched roof it looks like a typical English pub – and inside there’s a cosy beamed bar filled with locals kicking back after a day’s work – but this is no ordinary village local. Mike and Imogen bought the pub back in 2006 and have since put Murcott on the foodie map; they even grow their own vegetables out the back.
It’s a friendly, welcoming place: the rear extension has more of a restaurant feel, while the lively front bar is the place to be if you like a bit of atmosphere. You’ll always find a couple of refined pub classics on the menu but it comprises mainly of elegant, sophisticated dishes – maybe roast Orkney scallop with artichoke and cuttlefish ragout, followed by breast of Cotswold chicken with truffle farce, and then rum-soaked savarin to finish. For the full experience go for the tasting menu.” Michelin 2022.

“Winding your way through Oxfordshire scenery towards the Nut Tree Inn, a short drive from renowned shopping centre Bicester Village, is reminder enough of the rural location of this excellent gastropub.

Sitting in the neigh-on comatose village of Murcott, the fifteenth Century inn and its chocolate box exterior (all thatch and whitewash) gives nothing away about the Michelin-starred modern British cooking found inside.

The Nut Tree Inn is a traditional village pub which serves modern British food in the restaurant but remains somewhere to stop and have a pint or relaxing drink at the end of a long day even serving its own Nut Tree ales.

The pub has been awarded a Michelin star for nine years in a row and has been named runners up in the Copa Jerez Sherry finals 2016 where eight finalists competed against each other in a live head-to-head challenge at the Restaurant Show.

The menu changes on a regular basis to make the most out of the best ingredients available.

Expect the likes of plancha grilled diver-caught scallops with cauliflower and curry oil and a torte of braised shoulder and roast best end of lamb with olive purée, anchovies and jus nicoise on the menu.

Ingredients along with many house-made products such as smoked salmon, bread and meat from the rare breed Gloucester Old Spots in the garden, are carefully sourced.”

Chef-owner Mike North already had experience in the upper echelons of British cuisine when he bought the pub with his wife Imogen in 2006 and it wasn’t long before the infamous French red book took notice and awarded the establishment a coveted star, which it has held ever since.

Perhaps North’s greatest strength as a chef is his ability to add modern flourishes without losing sight of what it means to run a proper pub – locals nursing pints at the bar are welcomed as eagerly as pilgrims to his cooking.” From Top 50 Gastro Pubs 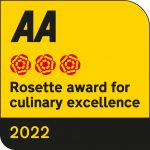 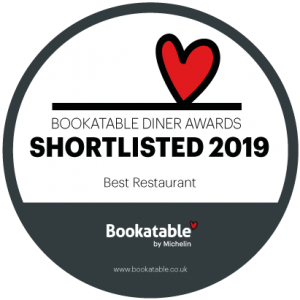